The New iPad Reviewed in 60 Seconds 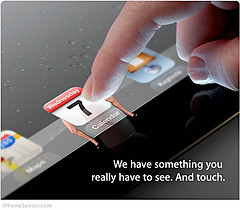 At the store today I had a chance to finally get The New iPad in my hands.  I was actually pretty excited for this product launch because for the first time since the initial launch of the iPad 1, the tablet had something no other tablet on the market had, the Retina™ display.  This display has so many pixels that the human eye can't differentiate between pixels at a standard use distance.  This type of quality display had previously been launched with the iPhone 4.

First Impressions of The New iPad

After holding the device in my hands and turning the device on, I was brought to The New iPad homescreen.  The problem was, it looked exactly like the standard iOS 5.0 home screen seen on the iPad 1 and 2. In terms of holding the device in my hand, there was absolutely no difference.  I had heard about the differentiating high definition screen, I had heard about the increased CPU and GPU on it, but holding it, launching apps, and flipping around with my fingers felt exactly the same.

I launched some games and loaded the standard photo gallery. I knew that the display was of a higher resolution than my eyes could see, so I leaned in very close to see the pixels. The pixels of The New iPad were very small, close together, and hard to see, but I didn't get the feeling that this was a revolutionary step forward in technology.

The UI was quick and snappy, but it always has been on the iPad, so the new GPU or CPU don't seem to make any difference.  I went in expecting this to be a monument to the advances in technology since the March 2011 launch of the iPad 2, but it felt disapointingly familiar.

The Future of Retina

While Retina seems like an important move forward, the iPad isn't innovative or creative in its use. Without Steve Jobs at the helm, Apple seems to be attempting to leverage its remaining exclusive hardware manufacturer parternships to attempt to keep competition out. The problem for Apple will be that a new display, while nice, doesn't change anything. No new workflows, paradigms, or opportunities are opened by this device.

As technology continues to advance, the other tablets on the market will catch up to this screen resolution and display quality. In order to retain its dominance, Apple is going to need to find a new Steve Jobs, and hope that they can create new markets, rather than just increasing the screen density on the old ones.