Microsoft Surface Gets The Basics Right

Today Microsoft announced the Surface tablet. It's a relatively standard tablet with a 10.6 inch screen, but they are attempting to include greater computing power, a stand, and a new ultra-flat keyboard that is similar in size to Apple's smart cover.

There are really two things that tablets have thus far failed at, despite the best we have seen from Apple with the iPad and from Google with Android 3.x and 4.0.

The first big win is the presence of a touchable keyboard on the new tablet. This is an absolute requriement for successful adoption of a computing platform. Half of what we do with a computer is highly repetetive, low-creativity data input. Human speech is faster than typing on a keyboard, but typing on a keyboard is still an order of magnitude faster and more accurate than typing on a touch screen. Human speech is pretty great on Android 4.0, but definitely won't replace typing in any meaningful way because of privacy concerns, as well as lower limits on sustained high-speed input. People aren't yet used to talking to their computers for 3 hours, but they are absolutely used to sitting at their keyboard for 3 hours.

I expected touchscreens with tactile keyboards to solve this problem, similar to some of the products announced at CES this year. Microsoft has gone a different way with building a tactile keyboard in the case. I should have expected this. Every day I carry around a Galaxy Tab 10.1 with a Logitech case that doubles as a keyboard. The keyboard makes the full tablet feel heavier than it needs to though, so Microsoft's solution is suprisingly elegant. 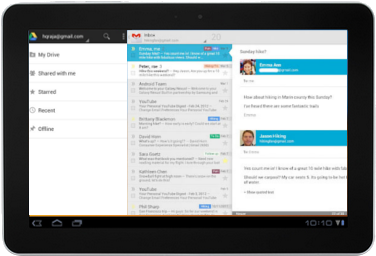 The second success in Microsoft's Surface tablet comes with the Windows 8 capability for multitasking. Android is capable of running multiple tasks simultaneously for users, but offers no interface for showing two screens at the same time. This is an absolutely critical feature for tablets to take a spot in the long term computing world. Countless times, I've wanted to type or edit a document while looking at an email. This is completely impossible on Android or iOS. I have even resorted to taking a picture with my phone, or combining my phone and tablet to achieve this effect in desperate situations.

Although they have not yet proven this feature, and the word is that it will require developer support, being able to show multiple applications simultaneously will win this tablet a solid place in the world of computing. Android has a huge opportunity to take the lead here though, because their applications are already optimized
for multiple screen resolutions. Imagine the email app running on 70% of the screen, and then phone version of 4 square running in the remaining 30% space. If Google had the guts and the brains, they would have already done this with Jelly Bean, and my fingers are crossed.